Lately I’ve been intrigued by how affordable (or even free) a VPS is nowadays and how (relatively) easy can one host his own website(s). This is determined mostly by ones technical expertise and the tools available at hand. To better manage several websites and everything related to them (DNS,FTP,databases,email and so on) one would use a “hosting control panel”. Tools that hosting providers use to manage customers, customer websites, resellers and tools that are also being made available to end-users to manage their website. The most known in the industry would be CPanel (end-user tool) and WHM (administrative control panel). Their prices can get pretty high and would mostly be suited for companies specializing in web services / hosting.

My goal is to manage my own websites and probably some other websites for friends / family and maybe several customers. That automatically means low-cost. (everything would come down to low cost, but my “low” would be different than that of a specialized web services company).

Low-cost in this context would mean a VPS with a monthly cost compared to the monthly cost of shared hosting. DigitalOcean offers VPSs starting at 5$, while other providers allow more flexibility in customizing your VPS and the cost can come down to almost half that price. So you end up paying less for a VPS over which have full root access than paying for a shared hosting account where you will most likely not even get shell access. It sounds too good to be real, right ? It almost does, but one still has to consider the time invested in setting up / configuring / securing / monitoring the VPS. I wouldn’t even consider starting this from scratch, reason why I’ve tested various free hosting control panels that can handle a lot of work for me.

Most, if not all of these free alternatives to Cpanel, have support for various technologies, operating systems and offer easy installers. What I’ve looked for was applicability for my use case ( lightweight on resources ) , documentation, support and ease of use. This is very subjective, so don’t expect that after you’ve tried them you’ll get the exact same opinions.

Has a pretty good organized documentation section and active forum. Even though it does not have a fast script installer like other solutions, the ISPConfig team made step-by-step tutorials for various OSs and software versions. Really straightforward to follow, only copy-n-paste with no errors (so far for me). If you can’t handle that you can also buy the remote installation servicing.

The WebUI is easy to use, having overview details on the front-page. Freshly installed in a VM it takes around 490MB RAM, which is to be expected based on the number of services/software running for and with ISPConfig 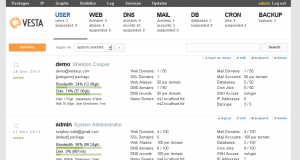 Minimalist and easy to use. Has predefined default packages that a user can modify to suit their offers. A big plus is easy backup and restoration of configuration and a big surprise is their API, a feature not normally found in these control panels. The community forum is part English, part Russian but you can get the neccesarry info. Their minimal requirements are those that one would expect, but I have found that it eats around 150-160 MB RAM in a freshly installed VM.

Kloxo is the base software made by LXCenter, while KloxoMR is a fork by an independent developer which fixed some OS support and security issues. It packs a lot of interesting tools and one of the WebUI themes is similar with Cpanel. It gave me the impression of a “sloppy” project, due to its lack of OS and user support. An initiative like KloxoMR is admirable and congrats to the developer. The problem is that a project like this would require a team rather than a single maintainer. Although I was initially attracted by the UI , it lacks reliability for its core functionality.

ZpanelCP has a relatively long history , starting out as an independent project and has been acquired by hosting company HostWinds, which should raise the bar on development on support. Sentora is a fork of original project, ZpanelCP. Both projects are maintained by the same team, which would make support a bit of a hassle, or either theinitial project was discontinued (too bad there’s nothing official on the websites about that). Sentora is relatively immature, as it started in 2014, but it should be taken into consideration that it has its roots in an older project.

The EHCP website is organized in a weird way, so finding the right sections that can solve your issue can be a bit frustrating. It has a straight-forward interface, easy to use and understandable. As features, it comes packed with most of what is needed. Seems like a mature and solid project that works looking into. It also has a fork called “Force Edition“, didn’t look at that though.

Pretty slick interface, but probably one of the most resource intensive ones so far. Might be what you’re looking for if you want the nice looking GUI for users. Its used by many people and has one of the biggest partners list from all Cpanel alternatives, proving to be a professional choice.

These are the ones that I’ve tried so far. Updates will be added as soon as I try something new. And yes, there are still a lot of alternatives out there.