Today was a bit different. We had a round-up with the guys from the Automotive Engineering department for some brainstorming sessions and fictive interviewing that had the purpose of generating some input for one of the educations “upgrading” projects. In other words, they have involved us (by getting some suggestions, wishlists, requirments) in an original way.

After some outdoor mini-team-building activities, we formed groups of 7 and followed the structure: 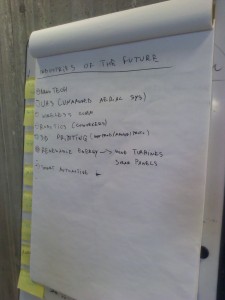 My team opted for the industries that will act as “boosters” for the rest of the industries in the world – examples include nanotechnology, UAS (unmanned aerial systems) and the renewable energy sectors. 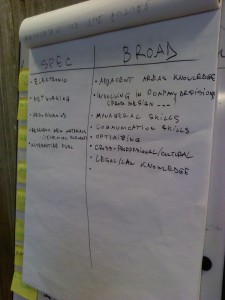 The requirements have been split into the specific ones (in terms of specific educations or job positions – examples include more software development, more networking) and the broad ones. The broad ones are basically what will be asked out of employees in general – as in self-managing skills, good communication skills, knowledge in adjacent areas and others. 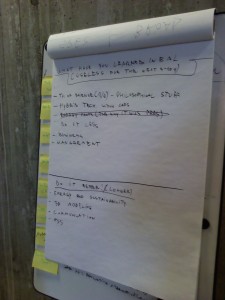 There was a small difference between us and the Automotive guys, but it was mainly related to (almost) philosophical courses in a technical education. 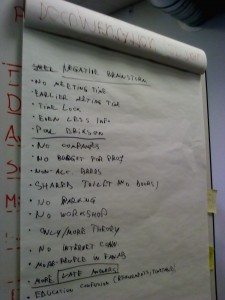 We had the liberty of choosing anything. Even weird/irrational stuff that would never happen (like having forced cold showers every morning we get to courses). This was an interesting approach. It mainly served as a ground for generating improvements in the next step.

These improvements were more “wishlists” or solutions for the problems or things that we do not want to happen (the previous point). It had to be as specific as possible.

After making the fictive interview with the fictional character, each team was handed a character persona. Each persona had different educational backgrounds and different interests. This ranged from the a sports-interested and design oriented 20 year old girl to a 19 year old technical oriented avid gamer.