Yes, you are reading it right – this is (probably) the most comprehensive airline complaint ever made. Why ? Because it shows an accurate picture of what really happened with a dose of constructive criticism.

It will actually be useful for us, as passengers, if you (the reader) can prove me wrong with an even better complaint. Twice as better  if directed at the same airline. Feel free to do it in the comments.

Note – this is not a ‘mad customer yelling for compensation‘ post. It’s more of a ‘yes, this is how it is, i lost this and this ; I will not even be partially refunded in terms of money, time and energy  but this is how the airline could have done better and most important – this is what YOU should do, to avoid the headaches’ . KLM support might be very happy to read this, knowing that I have no expectation of refund but don’t get me wrong. There are things that CLEARLY need reimbursed. And it should be done as fast as possible. I’m just realistic and aware of no legal basis in place to cover for the other things mentioned, besides direct money losses.

Totally understandable – I would rather not fly than risk dying in an airplane.

The problem here is not the weather  but the poor operational management from KLM as well as the customer support that makes you feel like nobody.

What was the loss

People tend to calculate their losses in money only, equivalent to their direct expenses, but neglect their time and energy directly and indirectly wasted. My losses for 2 canceled flights are summarized below :

Average calculation of money lost (not based on my expenses, but based on city averages)

The above is for 1 person. Multiply that with 200-300 of people that lost their flights, just like i did.

200-3oo people – random number i just threw out. We have an official number from the local Dutch press , going to the range of thousands. Cannot quite see how many were related to KLM but let’s multiply again

But nobody cares about these loses, even though it gets close to a million because it’s on the passenger side. The airlines are still making lots of money, as detailed below and maybe get affected by such incidents, but of course, not as much as the passengers.

1. Direct talk with customer support in the airport

Right after the flight got canceled and during the following days, I repeatedly tried to call KLM. All answers were automated, stating that they are ‘experiencing high volumes of calls during this period‘. The call was ended without any direct human interaction and I was recommended to try the other channels. Fair enough – let’s try the other channels.

Right after the flight got canceled and during the following days, I repeatedly tried reaching KLM support on WhatsApp and Facebook messenger. No answer.

Apparently, KLM ‘typically replies instantly’ . Not the case. What was even worse, was that when they finally replied (after 1 week), it was with an automated message related to a customer satisfaction survey in Spanish. 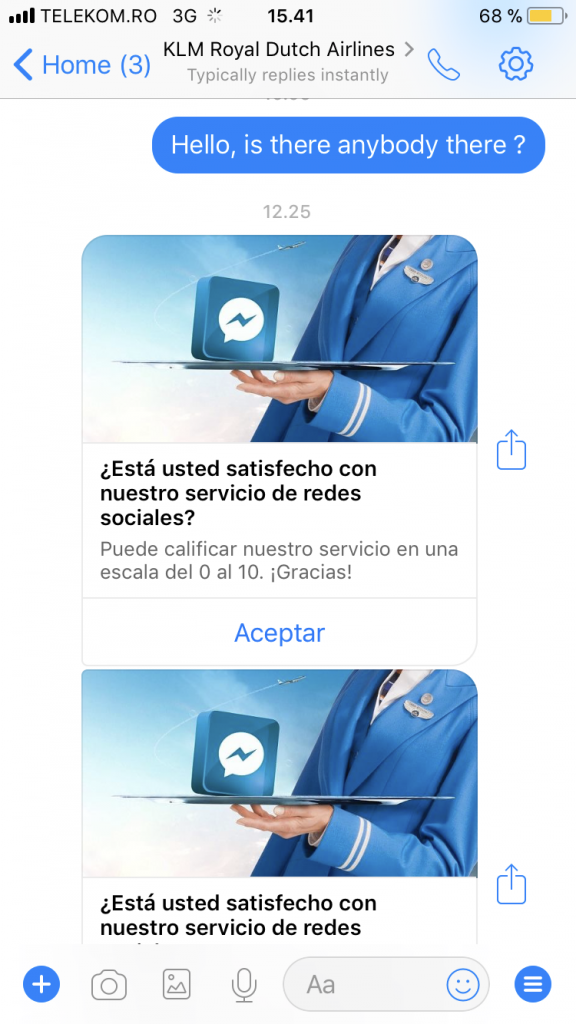 No idea why they selected Spanish, but very thoughtfull of them to include the message twice.

But at least KLM is ‘happy to help you’, as they clearly state it on their website.

Same thing with WhatsApp, where the reply came after aproximately 1 week and it looked like an automated one. 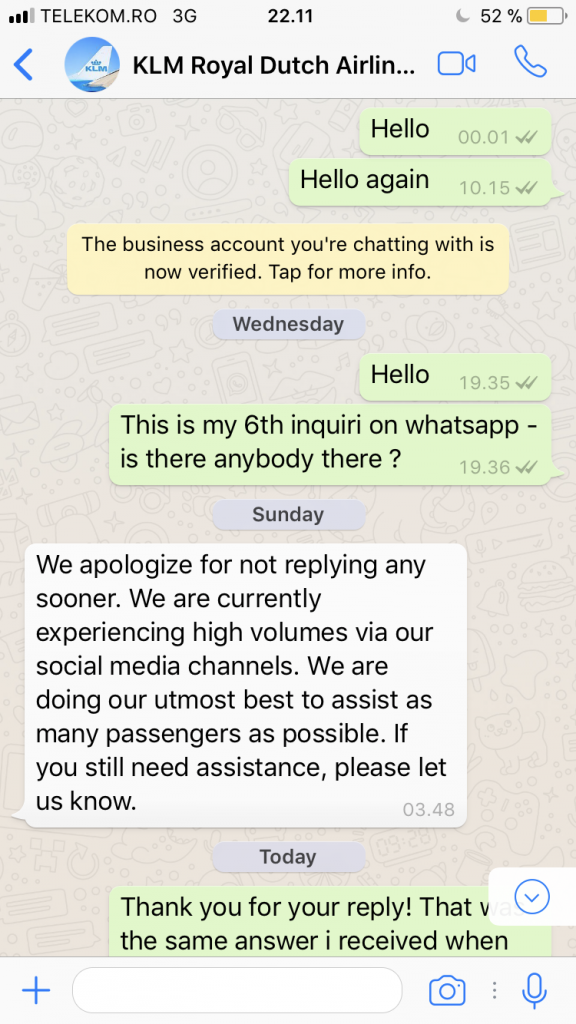 ‘We are currently experiencing high volumes…‘ – this sounds very familiar as I’ve heard the same thing over the phone.

If you are too busy to answer on phones and on IM, what are you actually doing ? Are all customers receiving this ? Who is getting an answer ? What is the criteria of selection ? 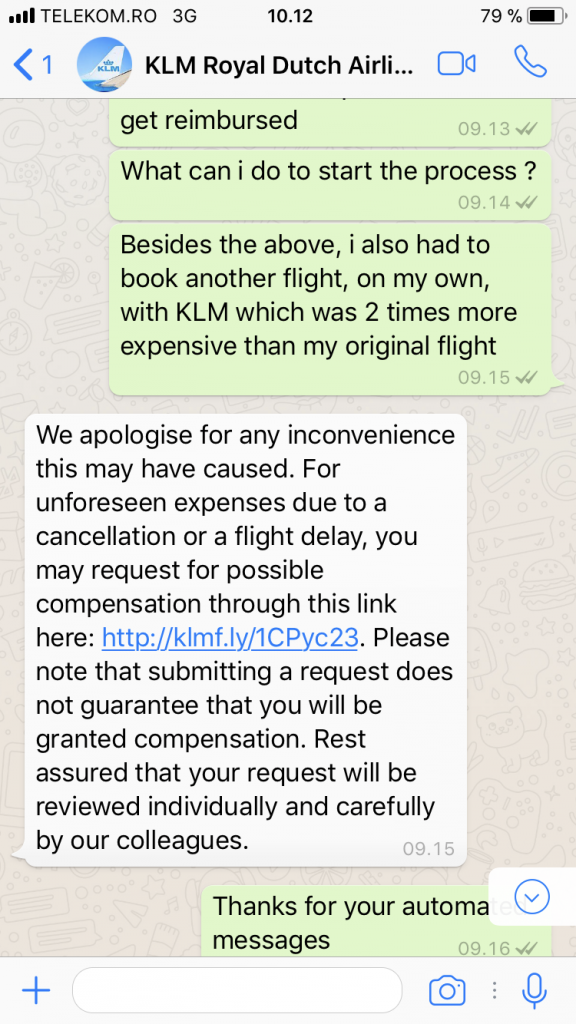 This could have been easily avoided if they had emailed all passangers with canceled flights with this message. Much more easier.

I immediately started filling in the online form for the complaint but as I was feeling a bit lost, due to the lack of human interaction. Reason why I wanted to see if there is a human on the other side. 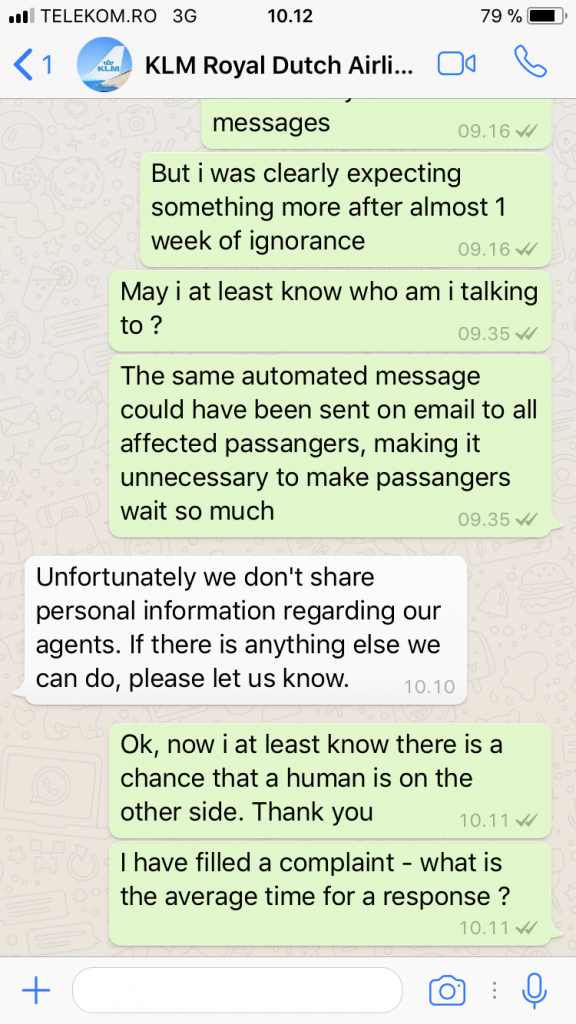 Apparently, they do not share personal data of their agents. Fair enough, I work with personal data protection so I can totally relate.

This is the main purpose for this article – to have something good to share on social media, that will clearly attract the attention of the support staff.

This is the only option, since I am either ignored on all other channels or the answers I receive are automated and without value. Given the time and quality of the support responses, I honestly do not know if somebody will even read my complaint until 2018.

If any KLM support or management staff reads this and comments, I can gladly send you the reference number. Posts updates will follow with the response time on the complaint. Check out the updates in the Updates on the Most comprehensive complaint ever on the horrible customer support from KLM post.

If that were true, I would have seen a reply to my complaint form, or on any support channel or a comment on the blogpost from @KLM support management or leadership. But i'm guessing, @KLM does not stress responding in cases that aren't too visibile to the public like Twitter ?

What could have been done better on the Airline side

Lets start with what was actually ok.

The Initial canceled flight was automatically rebooked by KLM

The morning following my first canceled flight, I received an email saying that my flight was rebooked. Perfect, until the second flight got canceled as well.

Airport staff announced passangers of what can be done

When the second flight got canceled and the entire airport was shut down, airport staff told everybody the following :

I knew exactly what needed to be done at that point. Thank you airport staff, which I’m not sure if they were KLM staff (no sarcasm).

But now, let’s look at what can be improved.

I get it – multiple flights get canceled. You have hundreds/thousands of people screaming at customer support. It’s normal to get overwhelmed – when you just opened your business and have no idea whats with the airline industry.

But KLM opened ALMOST 100 YEARS AGO. And my canceled flights due to bad weather were not the first maybe 100 such cases they’ve experienced. So why the bad response ? 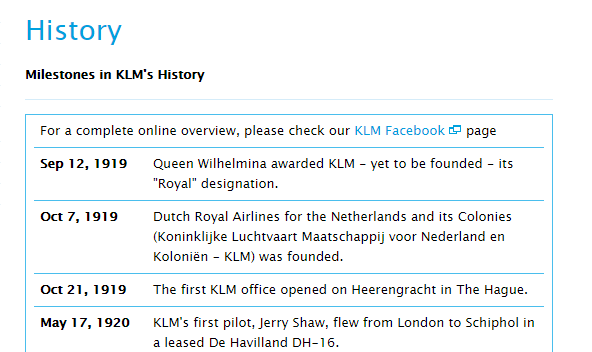 What is not normal is the fact that they did not properly prepare for it. Given that bad weather conditions where announced – KLM WAS EXPECTING flights to get canceled. Operationally, this should be covered by extra support staff. The amount required would have been calculated based on the risk.

Maybe this was done, maybe not. KLM support or management – please comment because looking at it from the passengers perspective, this was clearly not thought of.

The latest KLM financial report shows an increase in temporary employees from 2016 to 2017, but a decrease in ground staff.

Im not a business man, i’m just a passenger – but when I see an increase in net income of about 62% and passenger losses of almost 250000 euro (in case of 300 affected passengers)  i just feel outraged that KLM could not have used at least something out of that 705 million net income to avoid all these complications.

This would have been a dobule-Win. Both for KLM and  for the Passangers. Oh, and it would have been much more cheaper for KLM – because that’s the important part – low costs, high profits.

Enough said in the heading. This might have been possible if the staff was properly supplemented based on lesson 1.

This is something that makes the passanger feel totally ignored. It is also very, very frustrating. KLM support or management staff – I’m curious to see your reaction to receiving a customer satisfaction survey after you are being ignored for around 1 week.

Let’s face it, it’s all about the money and we already know that. This is why people do business – for money and not for customer satisfaction. And it is totally understandable. 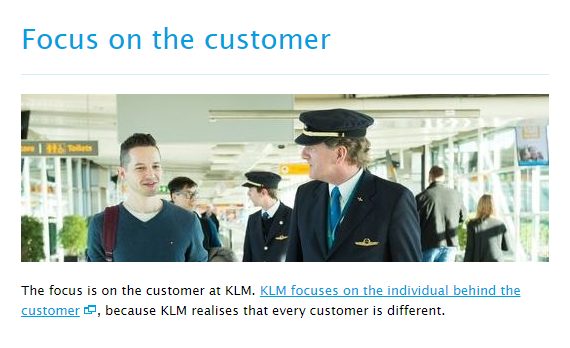 I just hate the fact that these businesses still lie about how much they care about their customers, when the only thing on their agenda is how to increase revenue and decrease costs. Customer satisfaction doesn’t quite fit in neither of those, as it increases costs (or does it as it, ironically, increases revenue on the long run).

But sure, you can get a platinum / gold / business / blabla membership and then you can get the attention required. Sure – I need to pay extra to be treated like a human being, thanks!

I accepted the fact that nobody will ever compensate me for my time and energy spent on an incident like this. The money will probably get reimbursed (most likely not entirely), but nobody will give you your time back. Therefore, it is up to you, as a passenger to prepare for this as best as possible.

Just like in any incident response program, let’s start with preparation

It then goes one with the ‘containment‘ phase where you just want to minimize/stop/contain the damage as best as possible and move on with your life.

What people typically do – get confused / wait / shout / get angry

What you should do

Follow-up on your complaint until you get an answer. You never know how long it will take.

I’m over 1 week after the incident and I’m still following up.

Oh well, more time wasted to get half the money I lost because other people are getting hundreds of millions annually. Depending on what you work with and what kind of job(s) you have, it might not be worth it to spend the time to get the money back.

I’m just looking forward for the moment when I can fly in private jet to avoid all of this. Until then or until i finish the follow-up stage, I’ll keep updating the post.

We can’t really do too much about this but prepare based on the risk levels. This was a valuable lesson for me in terms of risk management and incident response and will hopefully be for you too.

Check out the updates in the Updates on the Most comprehensive complaint ever on the horrible customer support from KLM post.

All external sources referenced above are listed below. Other relevant references have also been included