This is a follow-up post on the previous article related to the horrible customer experience delivered by KLM.

KLM is an european airline which is opened for almost 100 years but that is clearly not reflected in the customer support service.

Check out my canceled flights experience in the Most Comprehensive Complaint ever made (screenshots included) – https://t.co/bevy4GYxcz

After being ignored for almost 1 week, KLM support sent an automated message with a customer satisfaction survey. Nice! #KLM #airlines

Apparently, KLM is quick to reply in visible places, such as Twitter. But not that quick on answering complaint forms. Of course, nobody actually sees the complaint forms, except for the affected passenger (me) and KLM support so why bother ?

If that were true, I would have seen a reply to my complaint form, or on any support channel or a comment on the blogpost from @KLM support management or leadership. But i'm guessing, @KLM does not stress responding in cases that aren't too visibile to the public like Twitter ?

Almost 2 weeks have passed and 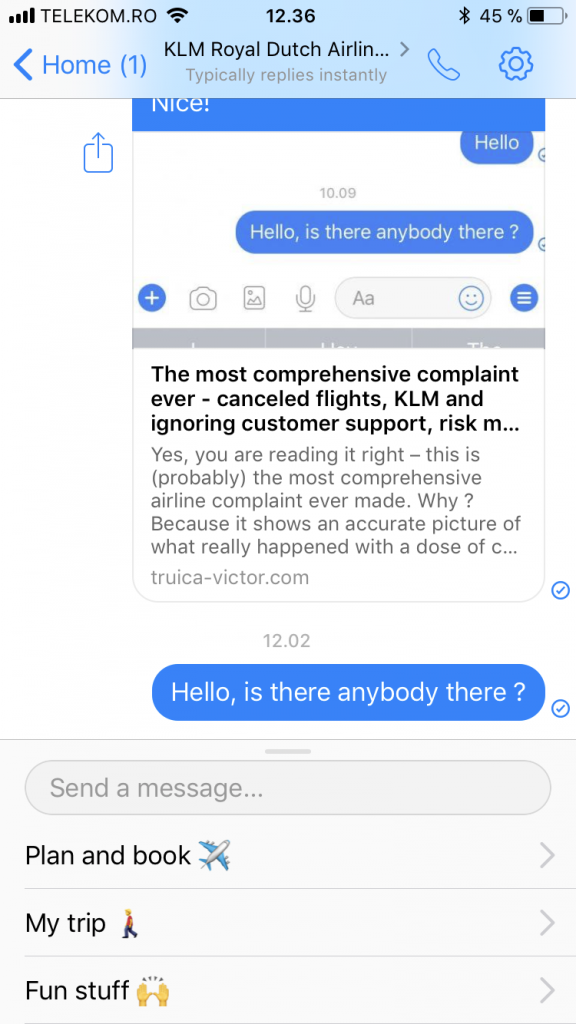 Instead of having some useful categories of things to use in the Messenger bot, KLM added a ‘Fun stuff’ category instead of including a ‘Support‘ category.  The conclusion here is that ‘fun stuff’ is more important than proper customer service. 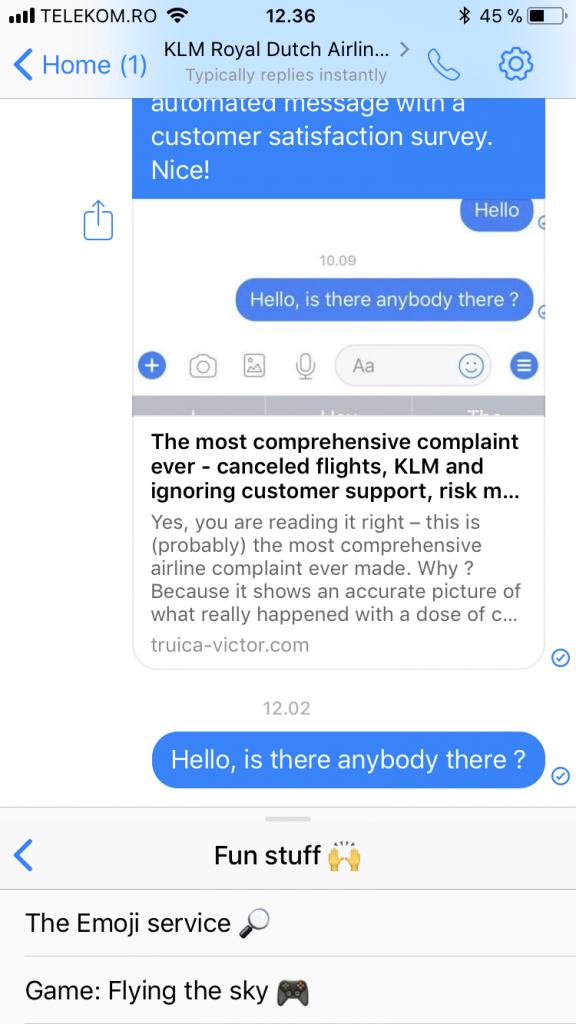 Who would actually need ‘The Emoji serivce‘ ? What was the reasoning behind this ? 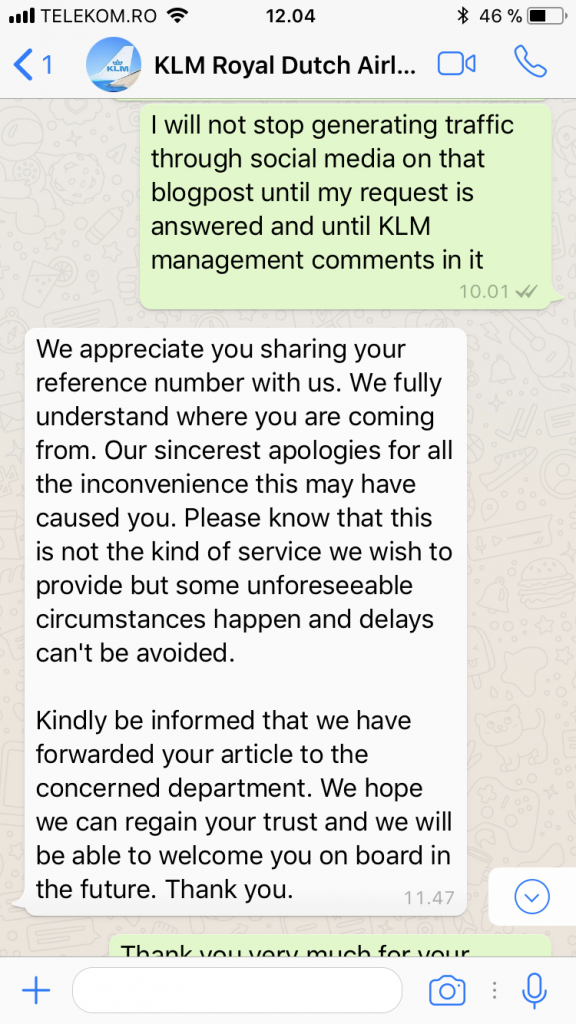 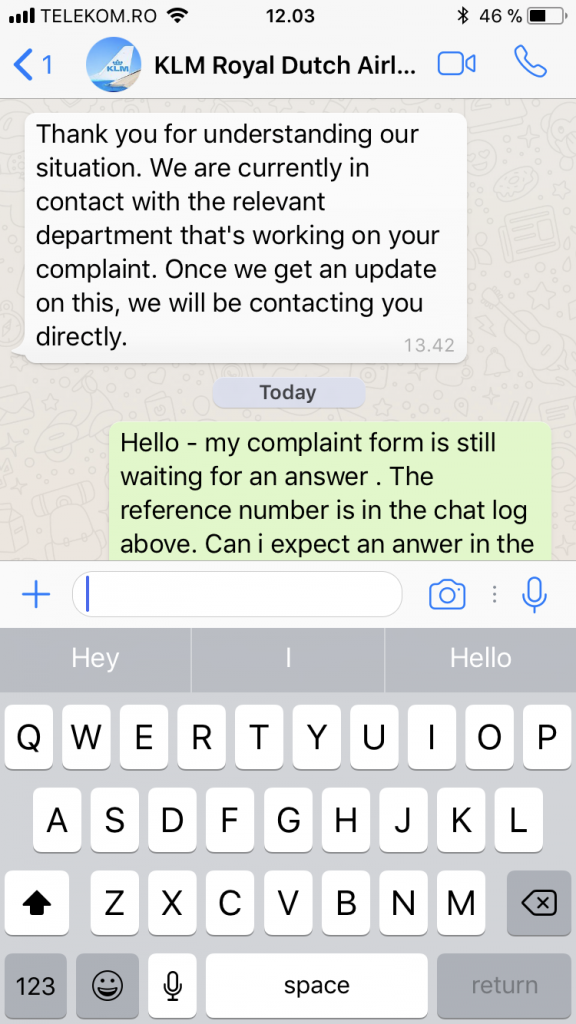 Update 3 – 23-12-2017 13:30 – KLM does not even read my Tweets properly or my blogpost, even though they say ‘KLM values your feedback. Serious consideration will be given to this.’

KLM is asking me for to open a Customer Care file online, which I already did and mentioned it several times.

Once you've created a Customer Care file online, you'll receive an email with a reference number. Could you please send us your reference number via DM so we can check the status of your file? >>

This makes me think that they are actually not reading what I’m writing and are just typing from a script.

I have already sent DMs to KLM but i have received no answer. I have forwarded my reference number on WhatsApp and I'm now waiting for your reply on the DM on Twitter to see if you are actually reading those messages before I send a reference number.

On Twitter DM, KLM is used to automated messages only, as I haven’t received any human reply so far. 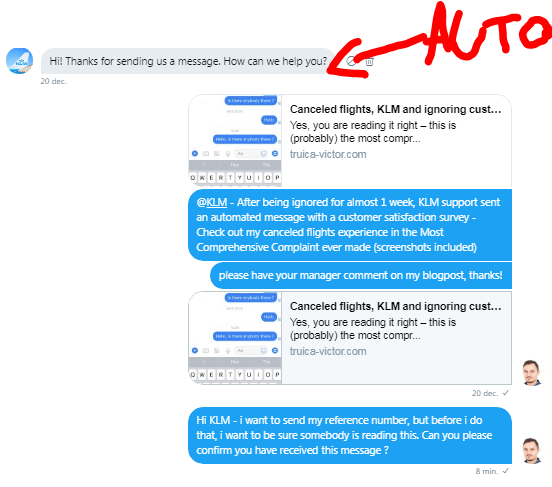 Not directly, no name mentioned but maybe it’s true. 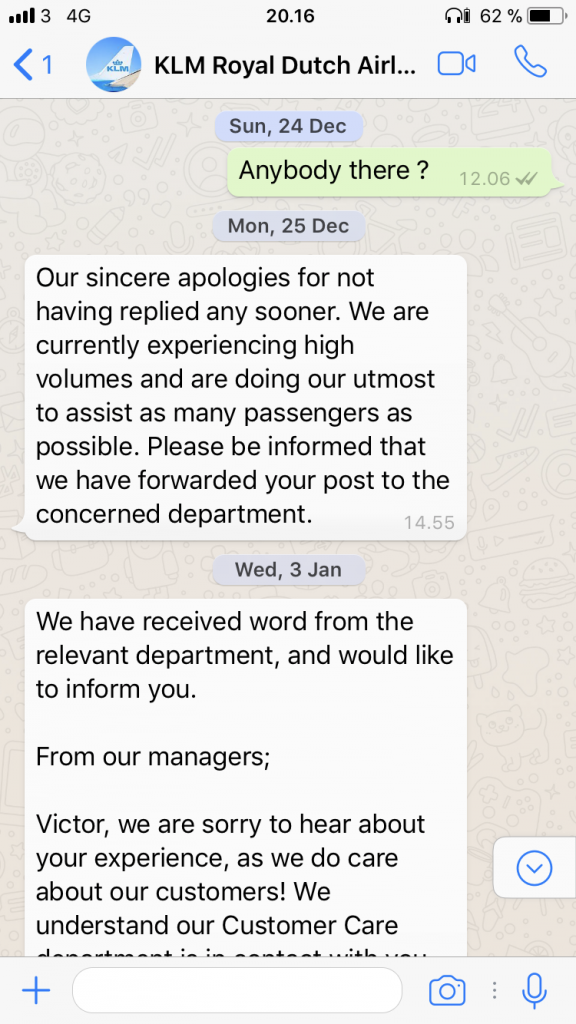 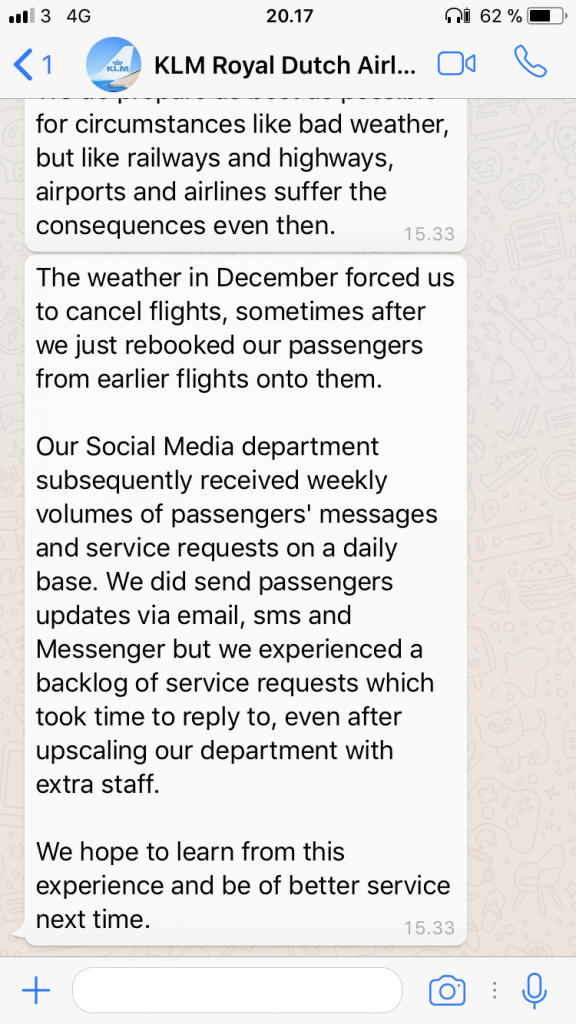 08-01-2018 – first real response, on email, to the Customer Care ticket opened in 19-12-2018. I intentionally didn’t attach any receipts to the initial email, so that I can see at which stage of the conversation i will be asked for them

The receipts were already scanned, they just needed to be attached. Which was done pretty quick

17-01-2018 – KLM acknowledged that it was a mistake and the remaining amount will be refunded accordingly.

22-01-2018 – the first part of the refund got into my account. Much faster than initially mentioned, but I’m guessing it’s better to under-promise and then to over-deliver and not the other way around.

1. Airlines are always overwhelmed by requests – KLM and maybe all other airlines, will always  ‘ regret that due to an unusually high volume of incoming requests at the moment, we will not be able to reply within our usual timeframe. ‘

2.  7,5 weeks is the time it took from the cancelation of the flight until the refund.

3. Twitter is the way to go. Even if they have multiple support channels, Twitter is the place where they are the most responsive, probably because of the level of public exposure.